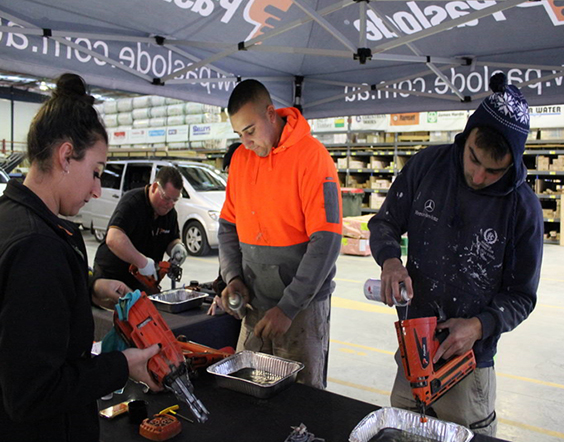 The workshops are held fortnightly within major building supply retail and trade outlets to teach tradespeople how to clean, oil and maintain their own Paslode tools.

“One of the major benefits of the builder or carpenter doing the service themselves is cost,” says Paslode area sales manager for Victoria Mark Grech. “If they take the tool to an agent for a service, it might cost up to $120.”

The service itself is minor – like changing the oil in a motor vehicle – but recommended after the tradesperson has used no more than five boxes of nails to keep the tool in tiptop condition.

For any major problems, Paslode – part of ITW Construction Asia Pacific Residential Division – advises that the tool be taken to one of its recommended agents for repair.

Attendees are warned to disarm the tool – including taking out the gas cartridge, battery and nails – before dismantling the gun for cleaning and oiling.

Response in the first seven months has been overwhelming with up to 40 builders and carpenters turning up to each advertised workshop.

At a recent Bayswater workshop, enthusiasm for the self-cleaning instruction was contagious with several tradespeople commenting that because of cost many builders and carpenters would not normally bother to have their tools serviced until they no longer worked.

Claude Bellassai, owner of Belle Construction Group Pty Ltd and a builder for more than 30 years, found the workshop very informative and was surprised how easy it was to maintain the Paslode tools.

“I’ll probably do the minor services myself from now on but still get any major work performed by the agent,” he said.

An advocate of Paslode tools (the only ones with a reliable name), Mr Bellassai has owned his Framemaster Powervent since 2009 and constantly uses it.

Two carpenters with Course Construction Pty Ltd – Troy Sedge and Harry Money, both of whom constantly use their tools – found the workshop extremely helpful.

A carpenter for eight years, 26-year-old Mr Sedge said after being shown how to take his gun apart and clean it, he was confident he could now do it himself.

“I bought this (Framemaster Powervent) nail gun in 2010 because it is the only decent and reliable framing tool on the market and use it every day,” he said.

So enamoured is Mr Sedge with Paslode tools, that he recently purchased another Framemaster Powervent.

His colleague 21-year-old Mr Money, also attending the workshop for the first time, said that without instruction if he had tried to clean a tool by himself he would have been all at sea – and normally paid a trade centre to do it.

“I now know how to take it apart and put it back together again,” he said.

“I haven’t had any issues with servicing and for 15 years have been using a gun that is still going fine and one of the best made,” Mr Stephens said.

Joel Henderson said he now felt comfortable about servicing the tool and they looked simple to maintain.

“Because we build houses one at a time, we only use the guns for framing and fixing in bursts of several weeks before moving onto other tasks,” he said.