There’s no denying we are in the age of the battery tool, but in the world of framing nail guns, there hasn’t been a lot of competition out there for industry leader Paslode until recent times.

In today’s market there are some new players with battery-powered framing guns that are using a spring/tensioner or compressed air spring to drive nails as opposed to Paslode’s Impulse (fuel and spark) system.

Before we get started I want to mention that for this test we had a Paslode Impulse FrameMaster and a red battery gun. We gave the framers to a few chippies and tradies to cut loose for a week. 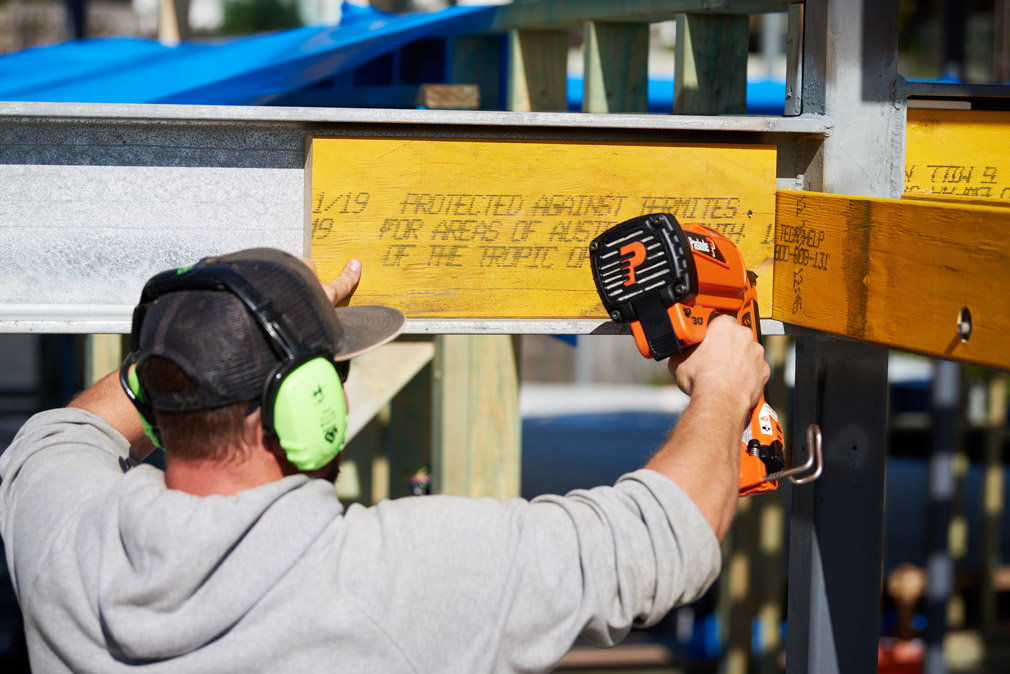 Now as far as testing framing guns go I’ve seen several tests elsewhere on battery framers versus gas framers, where they line up various pieces of timber and fire as many nails as possible as quickly as they can into different pieces of timber. Now as fun as this may seem, nail placement is about accuracy and precision. Instead, we decided to keep usability, accuracy and precision in mind for our main tests.

Our aim was to replicate the real use of a framing nail gun. 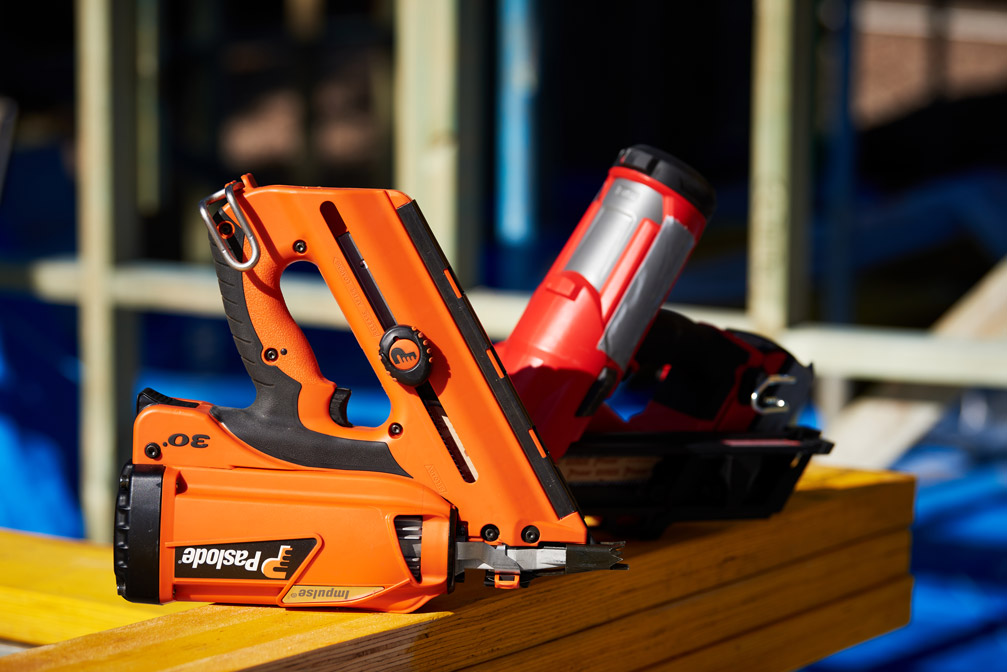 A tool company’s primary focus is about creating tools that are lighter, stronger, more efficient and easier to use than their competition. Keeping that in mind, the first thing we looked at was assessing the weight and grip of the competing guns.

I did manage to steal my wife’s digital scales out of the kitchen for the day and after weighing both guns revealed the red gun was 1kg heavier than the Paslode, but when fully loaded and ready to shoot this went up to 1.5kg, which equates to being 40 per cent heavier than the Paslode. In a world where tool manufactures are doing everything they can to reduce fatigue and wear and tear on their end-users, I thought I’d check in with carpenter Jonte from Waterview Constructions to hear his thoughts on this weight difference. Jonte shared, “When we are framing residential homes with usual material like 90 x 45 pine and larger LVL it’s a physically taxing part of the build, with a lot of lifting timbers above your head and of course having to shoot those timbers with our nailer. It’s not about the process of doing it once or twice, it’s about doing it day in and day out throughout your career. As a heavy user of the framing nail gun, any type of reduced fatigue or wear on my shoulders, arms and wrists is about prolonging my life span in my career.” 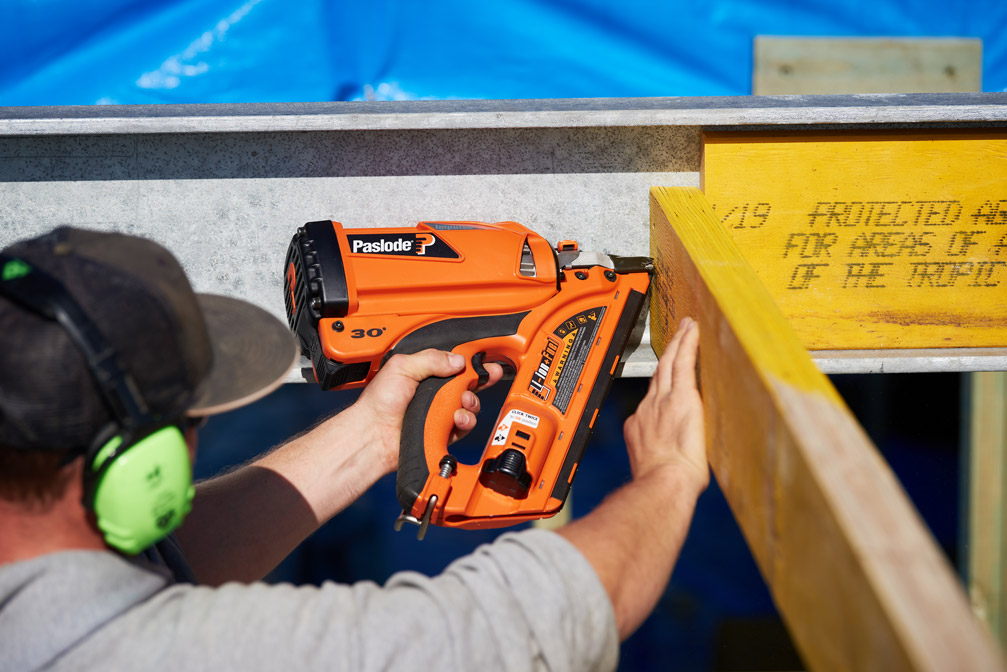 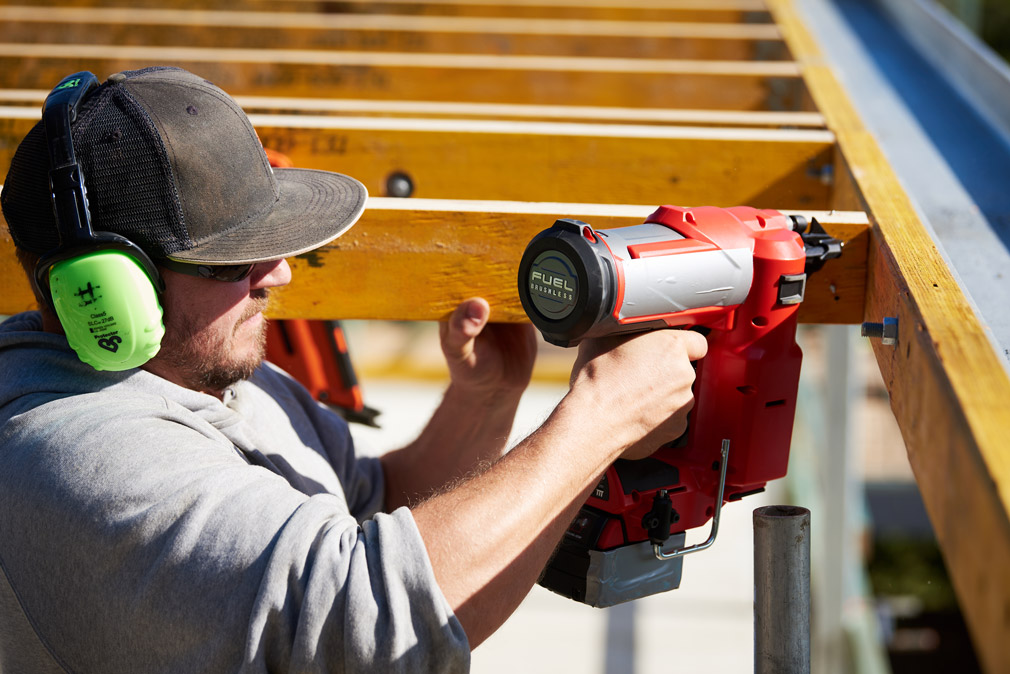 When you look at grip and triggers of both guns, you can see the material and grip design of both are excellent. Holding the guns in my hands felt great, but again we are looking for the experience from a user who has put the tool through its paces over the week.

I caught up with the apprentice Christian onsite who had been shooting nogs and frames for most of the week. Christian shared, “Both guns felt great on the initial inspection, but as the week wore on I found the balance of the red battery gun to be quite front heavy, which meant it put additional pressure on my wrists. This was probably amplified by the extra 1.5kg weight. If I was only using the gun on and off over various parts of the day, it would be a great nailer, but when the majority of the day was spent with the gun in my hand framing, I could feel the weight difference. Paslode delivered on weight and balance so is the clear winner. 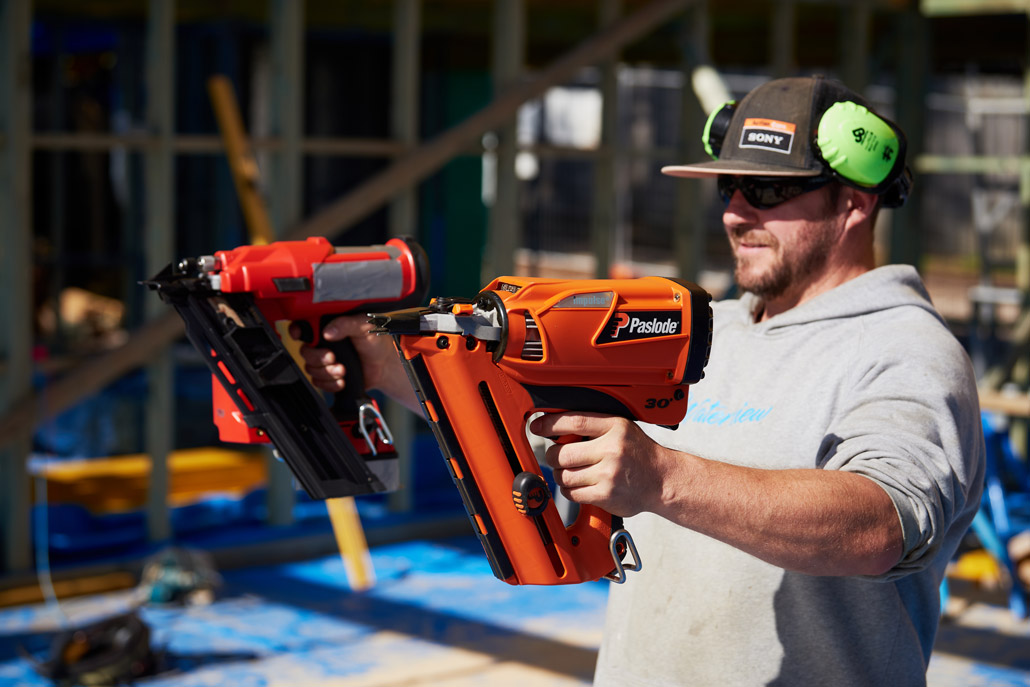 The main difference between the guns came down to firing actions. The Paslode firing mechanism has fewer parts, and the placement of this mechanism allows for a well-balanced gun. Another bonus of this system is tradies can service their own framer at smoko rather than sending it away to a technician.

We checked in with Jonte for this test and his thoughts summed up the general feedback from our tradies involved in the test. Jonte shared, “If I was a tradie that only used the battery gun occasionally or for small parts of the day I think the red battery gun is a great piece of gear – it fired with power and set the nails deep. But for cladding it did tend to overshoot, which meant extra filling and finishing work later. As a chippy who spends large amounts of the day using a framer, the heavy front balance and additional weight of the red battery gun was evident after a few days. So as cool as it is to have a new tool to use, when it comes to everyday use I’m going to stick with my Paslode.